Bono sang his description of New York as Kate and Jen laughed at the fitting soundtrack.  I had signed all the papers at closing and we were making the quick drive through town to my new home. That song was on the playlist I listened to for six months leading up to this moment.

The last four days were spent on the road driving from California to New York.  Always up for an adventure, Kate volunteered to make the drive with me.  Me, Kate and Cali the cat.

On day three, we had stopped for lunch when I noticed a text from Michelle my realtor.  Before I could respond she called.  “You have to get here by 2 tomorrow to sign or else you don’t get your house!”

The New York closings were different from California escrows and the detail about having to be there to sign with the sellers was a detail everyone forgot to tell me.  As much as I tried, I could not get anyone to budge on moving the timing to later in the day.  So 2 pm it was and I assured her I would be there, not quite knowing how exactly I was going to pull that off.

Kate and I ate in silence, deep in thought.  My stomach turned to knots and I was no longer hungry.  We played with all kinds of scenarios and decided to keep our hotel reservation in Columbus, Ohio for that night.  We would sleep for a few hours and get on the road at 2am.  This would give us plenty of time to make the closing. So much for easing in to New York

We were out the door in record time, cat and coffees in hand.  The next few hours were fist clenching as we carefully drove through the thickest fog either one of us had ever encountered and in the dark mind you.  This was the moment I was without a doubt the most grateful for Kate’s company.

Shortly after the sun came up, we crossed the New York state line and a peace washed over me.  The landscape even seemed to change to the serene country that I enjoyed all summer.  We still had five more hours until reaching Sharon Springs, but I felt I was already home.

Jen had recorded that drive and arrival knowing what was awaiting us.  My friends, new and old were waiting to surprise me.  There were Yvonne Gardner, Jen Hozer, Julie St. James, Jennifer Mann and of course Kate, all from my LA.  Then there were many from my new community making me already feel at home.  If I hadn’t been so tired from the drive, I think I would have been overcome with emotion. Other than the birth of my children, it was one of the happiest moments in my life.

Finding the video and watching it for the first time today, I cried with the emotion I was too tired to express that day.  Five months later it is just as amazing as that day and a reminder of what a special home I have found in New York. 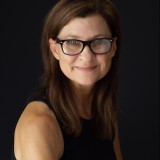